More than 2000 festivals are celebrated every year in our country. There is some reason behind all these festivals. This festival is not just about tradition or customs. All the things related to knowledge, science, nature, health and Ayurveda are hidden behind every festival. Makar Sankranti is a festival celebrated by Hindus on 14 or 15 January every year. It is celebrated in the month of Paush when the Sun enters Capricorn. Although Sankranti comes 12 times in a year, but its entry in Capricorn and Cancer has special significance. With which due to the increasing speed, the day becomes shorter with the entry of the Sun in Capricorn, while the entry of the Sun in Cancer makes the night longer and the day shorter.

Why We Celebrate Makar Sankranti

According to different beliefs of different religions, there are many reasons for celebrating Makar Sankranti, but Makar Sankranti is mainly celebrated on the auspicious occasion of the Sun moving from Dakshinayana to Uttarayan. It is said in Indian scriptures that when the Sun is in Dakshinayana, then there is night of the gods. That is, this time is a symbol of negative and on the other hand, when the Sun remains in Uttarayan, it is the day of the gods and this time is considered very auspicious. 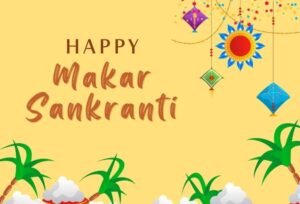 According to Hindu mythology, on this special day Lord Surya goes to his son Lord Shani. At that time Lord Shani is representing Capricorn. Makar Sankranti is given importance to celebrate the healthy relationship between father and son. It is said that when a father visits his son on this special day, his conflicts get resolved and positive happiness and prosperity begin. There is another story of this special day which is related to the life of Bhishma Pitamah. Those who had got this boon that they would get death by their will. When Bhishma Pitamah was lying on the decoration of arrows, he was waiting for the day of Uttarayan and he closed his eyes on this day. In this way he attained salvation on this special day.

Talking about the same food, khichdi and sesame sweets are eaten on the day of Makar Sankranti, which is very beneficial for the body from a scientific point of view. According to the scriptures, going from Dakshinayana to Uttarayan of the Sun is auspicious. According to the same science, it is beneficial for the human body because there is an increase in the ability to work in Uttarayan i.e. during the summer days.

Those who observe this special day worship Makar Sankranti in their homes. Some of the worship rituals for this day are as follows-

In the auspicious time of this festival, the virtue of bathing and donating has special significance. On this day people bathe in a holy river by applying jaggery and sesame seeds. After this Lord Surya is offered water and he is worshiped and prayed to him for his good future. After this, donation of jaggery, sesame, blanket, fruits etc. is also done. On this day kites are flown at many places. Occasion of this festival, dishes made from matchsticks are consumed. On this day, people make khichdi and offer it to Lord Sun God and the donation of khichdi is done specially. Due to which this festival is also known as Khichdi. Apart from this, this day is celebrated in different ways in different cities. On this day the crop is also harvested like the farmers.

Other Names of Makar Sankranti in India