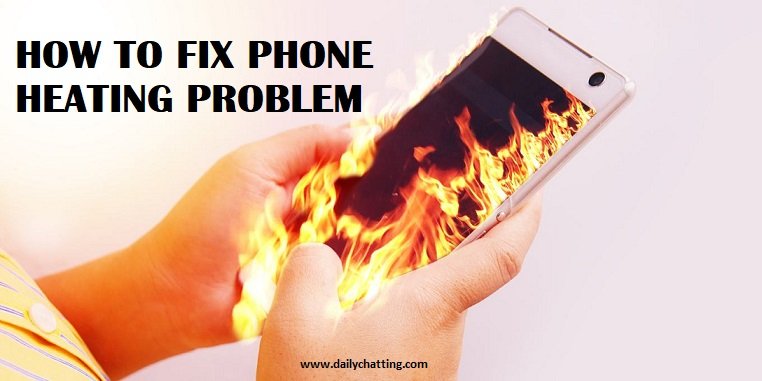 In today’s time, most of the people of the world are using smartphone. Every day new smartphones are being launched in the market. The number of smartphone users has increased very rapidly in the world. Because Smartphones with good features have also become available at low prices. So that even a middle class person is able to afford it. But in most of the smartphones these days a problem is coming to the fore. That is Phone Heating Problem.

Whether it is a cheap phone or an expensive phone, this problem is coming to the fore. When we use a laptop, the bottom part of it also gets hot, or if we watch TV for a long time, then the back part of it gets hot. Similarly, the problem of overheating is also coming to the fore in the phone. There are many reasons behind this. Through this article, we will tell you why there is a heating problem in the phone, How to fix phone heating problem.

Why does the Phone have Heating Problem

Most of the smartphones nowadays are such in which the problem of overheating is coming to the fore. Different company phones heat up in different amounts. Some phone gets hotter then some gum gets less hot. It depends on its use and also on the season. When the heat is high, the phone gets hot. The problem of heating in the phone occurs due to many reasons-

The battery is also one of the reasons for the heating problem in the smartphone. Many phones have such a battery that heats up quickly. This mostly happens in Smartphones with Slim Design. Due to less space, Battery, RAM, Processor, all these parts are placed nearby. Therefore, whenever any other part of the phone gets hot, it also has an effect on the battery. When the phone is charged or the phone is used, at that time the battery generates heat and completely spreads the heat inside the phone.

Due to being a slim phone, the size of the battery is also small. The smaller the battery, the faster it heats up. If a large battery is used in the Smartphone, then there will be no problem of heating the phone. When the battery of the phone gets hot, due to that its charge also starts ending quickly. The battery may also explode due to overheating.

Because of which or collide with each other and after the collision, the processor generates heat. The faster your processor works, the faster the heat is generated. Due to which the processor gets hot and our phone also gets hot.

Smartphones are being launched in Slim Size in comparison to earlier and people are also liking the phone with Slim Design a lot. Due to being slim, the rest of the parts of the phone are also fitted in it, which are quite close. When the processor of the phone is hot, it generates heat. Due to less space, the heat does not get a place to exit and the heat remains inside, due to which the phone becomes hot. By the way, the processor does not heat up so quickly in normal use.

One of the reasons for the phone getting hot is overload. If anything is overloaded then it does not work properly. If you are doing normal work on your phone like sending a message or watching a video or talking to someone, then the processor does not heat up quickly.

How To Solve Phone Heating Problem

1. Hardware or software can also be the reason for phone overheating. You keep checking the software in your phone whether it is the latest version or not. Many times it happens that the hardware of the phone is not able to use the software properly or is using too much, due to which the phone starts heating up.

2. There is also a problem with the battery. Avoid using your phone while you are charging your phone. With this, the heating problem in the phone will not be much. When you feel that your phone’s battery has overheated, then remove the external back cover of the phone for a while and let the battery get some air. So that it will cool down soon. This also reduces the chances of the battery getting damaged.

3. Check in your phone that using which app or game is causing more pain to your phone or which app is using your phone’s processor more. When you come to know about this, then uninstall that app or do not use that app much. If the processor of your phone gets too hot then your phone will work slow.

5. Overload is also a problem that the phone is overheating. When you are playing games or watching videos in your phone, do not use other apps with it. Because it becomes a heavy task for the phone. The less apps you use simultaneously, the more your phone speed will work and there will be no problem of phone overheating.

How much heat is normal for the phone

The problem of overheating in Smartphone is due to many reasons, which we have already told you, because of the technology with which today’s phones are being made, the problem of phone heating is also coming to the fore, whether it is Windows, iPhone or Android Phone. If the temperature of any phone is going up to 45 degrees then it is normal, but if your phone always stays in the temperature above 45 degrees then it is a problem of overheating.