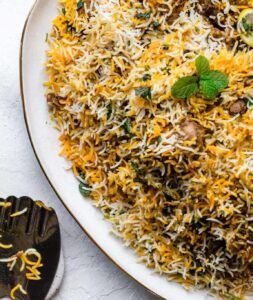 The word Biryani is derived from ‘Persian language’. Biryani is classified into two main groups one is Kacchi biryani in which the meat is kept uncooked and the other one cooked meat is used to make biryani that is called Pakki biryani. The Awadhi Biryani that is otherwise called Lucknowi Biryani belongs to Pakki type that is cooked meat is used to prepare this biryani.

Here we are sharing Lucknowi chicken biryani recipes, you could make the same version with mutton too. But have to cook the meat for longer time till it cooks well. It is similar to Hyderabadi biryani, but it varies from that because of its spiciness and richness in taste.

Foods from Awadhi cuisine are said to have been widely influenced by the Nawab of Awadh, who were of the Persian origin. Their royal dishes were aromatic and delicious, flavoured with spices, herbs, nuts plant extracts and saffron. The city of Lucknow is popular for the awadhi foods like Seekh Kabab, Shami Kabab, Murgh musallam, Shahi korma and everyone’s favourite Biryani.Lucknowi Biryani recipe is a generic one to make either chicken or mutton biryani. The recipe would not change other than the cooking time of meat. 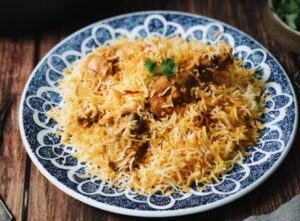 2. Soak the cashew nuts in hot water for 10-15 minutes and grind as a smooth thick paste with the dash of water using a blender.

3. Meantime fry the onions in a cup of oil till golden. Do not overcook the onions, over cooked onions taste slightly bitter and change the taste of the chicken masala, drain the fried onion from oil using slotted spoon and set aside.

5. Mix well all the ingredients and allow to marinate for half an hour to 1 hour minimum.

6. While the chicken is soaking, soak the rice in water for about 10 minutes in a big vessel add water and allow to boil and add the rice, whole garam masala and cook with salt. Now When it is half cooked drain all the excess water and spread all the rise in a flat plate and allow it to cool.

7. In a a big nonstick sauce pan or heavy bottom vessel transfer the marinated chicken and switch on the gas.

8. The mixture is starts to cook and forms a gravy.

9. Chicken cooks within 10 minutes in the gravy and If you have added more yogurt the gravy turns so watery so reduce a little if you added more.

10. Switch off the gas if needed and layer the half of the cooked rice and spread some coriander and mint leaves, fried onions and sprinkle some garam masala, jeera and ghee.

11. Keep another layer by adding remaining half of the cooked rice and drizzle the saffron milk or food color in circular motion and add some ghee on top.

12. Cover the pan tightly with aluminium foil or dough to seal the vessel to keep it air tight.

13. Keep some weight over the pan to seal the edges well to retain the aroma inside the pan.

14. Heat a tawa well and place the sauce pan over the tawa and cook for 40 minutes in medium flame. If you have very slow flame you could cook directly on stove top too or microwave or cook inside the gas oven.