Swami Vivekananda was the Hindu Monk and one of the most celebrated spiritual leaders of India. He was more than just a spiritual mind. He was a prolific thinker, great orator and passionate patriot. Swami carried on the freethinking philosophy of his Guru Ramkrishna Paramhans forward into a new paradigm. Vivekananda worked tirelessly towards betterment of the society, in servitude of the poor and needy, dedicating his all for his country. He was responsible for the revival of Hindu spiritualism and established Hinduism as a reward religion on world stage. 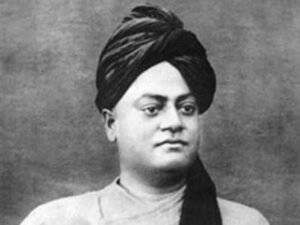 Swami Vivekananda’s message of universal brotherhood and self awakening remains relevant, especially in the current backdrop of widespread political turmoil around the world. The young Monk and his teachings have been an inspiration to many and his words have become goals of self improvement is especially for the youth of the country. For this very reason his birthday January 12th is celebrated as the ‘National Youth Day’ in India.

Swami Vivekananda was born as Narendranath Dutta, into an traditional Bengali family to father Vishwanath Datta who was an attorney at the Calcutta High Court and mother Bhuvaneshwari Devi, a housewife. He was born on January 12 1863, on the occasion of Makar Sankranti. His father Vishwanath was a successful attorney with considerable influence in society. Narendranath’s mother Bhuvaneshwari was the woman with a strong God fearing mind who had a great impact on her son. From his childhood days, he was interested in spirituality and uses to meditate before the images of Hindu deities. He was fascinated by wandering ascetic and monks.

As a young boy, Narendranath displayed sharp intellect. His mischievous nature belied his interest in music both instrumental as well as vocal. He excelled in his studies as well, first at the Metropolitan Institution, and letter at the Presidency College in Calcutta. By the time he graduated from the college, he had acquired a vast knowledge of different subjects. During college days Swami Vivekananda founded his interest in various subjects including religion, philosophy, social science, history, literature, art, sports, gymnastic wrestling and bodybuilding.

He was an avid reader and read up on almost everything under the sun. He persued the Hindu scriptures like the Bhagavad-Gita and the Upnishads on one hand, while on the other hand he studied western philosophy, history and spirituality by David Hume, Johann Gottieb Fichte and Herbert Spencer.

In 1981, Swami Vivekananda became a disciple of Ramkrishna Paramhans. Though he followed him as his Guru but was against Idol worship, and went ahead in search of real god. After the death of Ramakrishna, Swami Vivekananda went ahead and founded first Ramakrishna Math in Baranagar in 1886. He vowed to wander like a monk. From 1888 to 1893 visited many regions of India promoting Hinduism.

in 1893, Swami Vivekananda got a chance to visit West when the Parliament of the World’s Religions opened on September 1893 at the Art Institute of Chicago as part of the World’s Columbian Exposition. There he began his speech with “Sisters and Brothers and of America”, for which he received a standing ovation from a crowd of 7000. During his lecture tours in US and UK he actively promoted the ideologies of Vedas and formed Vedanta Society of New York in 1894. Though following his ill health he returned to India and spent his final years here.

Although Narendranath mother was a devout woman and he had grown up in religious atmosphere at home, he underwent a deep spiritual crisis at the start of his youth. His well studied knowledge led him to question the existence of God and for some time he believed in Agnosticism. Yet he could not completely ignored the existence of a Supreme Being. He became associated with Bramho Movement led by Keshab Chandra Sen, for some time. The Bramho Samraj recognized one God Unlike the idol worshiping, superstition ridden Hinduism. The host of philosophical questions regarding the existence of God rolling through his mind remained unanswered. During his spiritual crisis, Vivekananda first heard about Sri Ramkrishna from William Hastie, the Principal of the Scottish Church College. 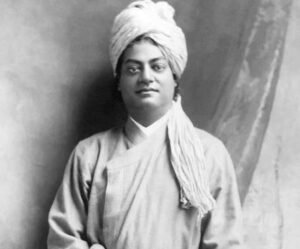 Earlier to satisfy his intellectual question for god, Narendranath visited prominent spiritual leaders from all religions, asking them a single question, “have you seen God?” Each time he came away without a satisfying answer. He put forward the same question to Sri Ramkrishna at his residence in Dakshineswar Kali Temple compounds. Without a moment’s hesitation, Sri Ramkrishna replied “Yes, I have. I see God as clearly as I see you, only in much deepeer sense.” Vivekananda initially  unimpressed by the simplicity of Ramkrishna, was astonished with Ramkrishna’s reply. Ramkrishna gradually won over the argumentative young man with his patience and love. The more Narendranath visited Dakshineswar, the more his questions were answered.

Lecture of Swami Vivekananda at the World Parliament of Religions

During the course of his wanderings, he came to know about the World Parliament of Religions being held in Chicago, America in 1893. He was keen to attend the meeting to represent India, Hinduism and is Guru Sree Ramkrishna’s as philosophies. He found assertion of his wishes while he was meditating on the rocks of Kanyakumari, the southernmost tip of India. Money was raised by his disciples in Madras (now Chennai) and Ajit Singh, Raja of Khetri, and Vivekananda left for Chicago on May 31 1893 from Bombay.

He faced insurmountable hardship on his way to Chicago, but his spirits remained as indomitable as ever. On 11 September 1893, when the time came, it took the stage and stunned everyone with his opening line, “My brothers and sisters of America.” He received a standing ovation from the audience for the opening phrase. He went on the describe the principles of Vedanta and their spiritual significance putting Hinduism on the map of World Religions.

Swami Vivekananda spent the next two and half years in America and founded the Vedanta Society of New York in 1894. He also travelled to the United Kingdom to preach the tenets of the Vedanta and Hindu spiritual reason to the western world.

Swami Vivekanand revealed to the world the true foundations of India’s unity as a nation. He taught how a nation with such a vast diversity can be bound together by a feeling of humanity and brotherhood. Vivekananda emphasized the points of drawbacks of western culture and the contribution of India to overcome those. Netaji Subhash Chandra Bose once said: “Swamiji harmonized the East and the West, religion and science, past and present. And that is why he is great. Our countrymen have gained unprecedented self-respect, self-reliance and self-assertion from his teachings.”

Vivekananda was successful in constructing a virtual bridge between the culture of East and West. He interrupted the Hindu scriptures, philosophy and the way of life to the western people. Narendra Nath made them realize that in spite of poverty and backwardness, India had a great contribution to make to world culture. He played a key role in the ending India’s culture isolation from the rest of the world.

Vivekananda had predicted that he will not leave till the age of 40. on July 4, 1902, he went about his days’ work at the Belur Math, teaching Sanskrit grammar to the pupils. He retired to his room in the evening and died during meditation at around 9. He is said to have attained “Mahasamadhi” and the great saint was cremated on the Banks of river Ganga.