Ratan Tata Biography: Ratan Tata is one of the most well- known and respected Industrialists in India. He is also the chairman of Tata sons and Tata Group. At the age of 73 Tata heads one of the country’s largest conglomerates which comprise nearly hundred forms with revenues totaling about USD 67 billion. He is also the chairman of major Tata companies such as Tata Steel, Tata Motors, Tata teleservices, Power, Tata Consultancy Services, Tata Tea, Tata Chemicals and the Indian Hotels Company.

In 1962, he joined the Tata Group and his first job involve working with the Tata Steel division in Jamshedpur, where he worked with the blue-collar employees shoveling stone and working with the furnaces. He was appointed the Director-in-charge of the National Radio and Electronics Company Limited (Nelco) in 1971 and was successful in turning Nelco around.

1. In May 2006, Ratan Tata announced plans to manufacture a small car, the nano at Singur in West Bengal. After the announcement he had to face protests from the local farmers who accused the state government of forcibly acquiring their land. In July 2006 Trinamool Congress chief Mamta Banerjee joined forces with the protestors. In August 2008, however, Ratan Tata announced shifting the project to Gujarat, which was led by then Chief Minister Narendra Modi.

2. In 2010, his name appeared in the ‘Nira Radia Tapes’ controversy. The controversy, which broke in November 2010, involved telephone conversation between corporate lobbyist Nira Radia  and various industrialists, politicians, journalists and bureaucrats that were leaked to the press. One of the Industrialist whom Radiya had spoken to was Ratan Tata. Following the release of these tapes, Tata went to court seeking a restrain on the media from carrying any more of such tapes.

1. Ratan Tata is a name to reckon with the annals of Tata Group’s business.  Although he is one of the most influential businessman in India. He is best known for his simplicity and loneliness, and the words used most often to describe Ratan Tata are ‘shy’ and ‘loner’.

3. Ratan Tata in many ways, is accidental Millionaire. He is, in fact, a gifted interloper, who, even after heading one of the biggest business conglomerates in India, lives an ordinary life and change the media spotlight. This quiet and humble Indian business tycoon drives himself to work in a Tata sedan.

4. Ratan Tata belongs to a family that had everything but children. Traditionally Parsee priests, the Tata family got its recognition when Jamshedji Tata open the textile mill in 1868. Strikingly, it offered workers pension and paid accident compensation, the facilities, which were nowwhere in the scene in the Indian business sector.

5. Although the Tatas  had built up a formidable business by 1971, the family was running out of heirs.

6. Ratan’s father Naval H Tata was born into an ordinary family in Surat. Naval parents died when he was too young, living him to be raised at an orphanage, but Naval was destined to win life’s lottery and at 13. Naval was adopted by Lady Navajbai Tata, who had been left childless and widowed at 40. Thereafter, Naval rose to become the Deputy Chairman of the TATA Group. 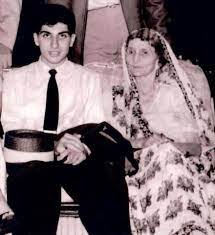 7. Ratan is, in fact, aTata by birth as his biological maternal grandmother was the sister of Hirabai Tata, wife of group founder Jamshedji Tata. Moreover, his biological grandfather, Hormusji Tata also belong to the broader Tata family.

8. Unlike the Ratan Tata’s present-day lifestyle of an ordinary person. He spent his childhood in luxury as he grew up at Tata Palace, a white Baroque revival style building in the centre of Mumbai, attended by a crew of 50 servants. Reportedly, Ratan was driven to school in a Rolls-Royce.

9. Ratan Tata’s fascination for America let him there to study architecture at Cornell University. While in the United States Ratan travel across the country, washing dishes to make ends meet.

10. In an interview, Ratan admitted falling in love with a young woman in America. Although he said that he had fallen in love as many as four times, the closest one was with that American woman. He said,

“Well, you know one was probably the most serious was when I was working in the US and the only reason we did not get marriage was that I came back to India and she was to follow me and that was the year of the, if you like, the Indo-Chinese conflict and in true American fashion this conflict in the Himalayas, in the snowy, uninhabited part of the Himalayas was seen in the United States as a major war between India and China and so, she did not come and finally got married in the US thereafter.”