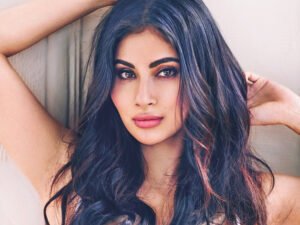 She(Mouni Roy) is a trained Kathak and Ballerina dancer. Mouni did her schooling from Kendriya Vidyalaya and then Mass Communication from Jamia Millia Islamia. her father Anil Roy was the office superintendent of Cooch Behar Zilla Parishad. Her mother Mukti Roy was a playwright artist.

Actress Mouni Roy was born on 28 September 1985 in Cooch Behar, West Bengal in a Bengali family. Mouni completed her early education from Kendriya Vidyalaya and then completed Mass Communication from Jamia Millia Islamia. She left her studies midway and made her debut in the acting world. At present Mouni Roy’s age is 37 years.

Mouni Roy was born and brought up in a Hindu Bengali family in West Bengal, India. her father’s name is Anil Roy. He was the office superintendent of her village Cooch Behar Zilla Parishad. her mother’s name is Mukti Roy. She was a theater artist. She has a younger brother named Mukhar Roy. her grandfather’s name is Shekhar Chandra Roy who was a famous artist of Jatra Theatre. Actress Mouni Roy considers her father as her role model. Mouni is still unmarried but if the news is to be believed then in January ther year, she is going to get married.

Her(Mouni Roy’s) parents wanted her to become a journalist, but due to her passion for acting, she left her studies and came to Mumbai. Mouni Roy started her acting career in 2007 in the TV serial ‘Kyunki Saas Bhi Kabhi Bahu Thi’ opposite Krishna Tulsi. In 2008, Mouni participated in the first season of ‘Zara Nach Ke Dikha’ along with Karishma Tanna and Jennifer Winget and won.

After that she never looked back. She has worked in many famous TV serials like Kasturi, Naagin, Meri Aashiqui Tum Se Hi, Do Saheliyan and many more. her role in the serial Naagin garnered him a lot of love from the audience. Mouni has also appeared in reality shows like Comedy Nights Bachao, Pati Patni Aur Woh, Jhalak Dikhhla Jaa-7. Mouni made her debut in the Punjabi film industry with ‘Hero Hitler in Love (2011)’. In 2016, she was a player of Arjun’s team Mumbai Tigers in the Box Cricket League.

She has also hosted the dance show ‘So You Think You Can Dance’ with Ritvik Dhanjani. Moni made her Bollywood debut in 2018 with the film ‘Gold’ opposite Akshay Kumar. Mouni Roy played the role of Sita in the animated film Mahayodha Ram. She appeared in Romeo Akbar Walter with John Abraham and Jackie Shroff in 2019 and in the OTT feature film London Confidential in 2020.

In September 2021, actor Amit Tandon accused Mouni Roy of using wife Ruby for her personal gains and that Mouni had left her midway when she was supposed to be with her. He vowed that he would never see Mouni’s face in life. Mouni Roy has also been in the headlines for the drastic change in her physical look.

According to media reports, Mouni Roy is going to tie the knot with Sooraj Nambiar on January 27, 2022.